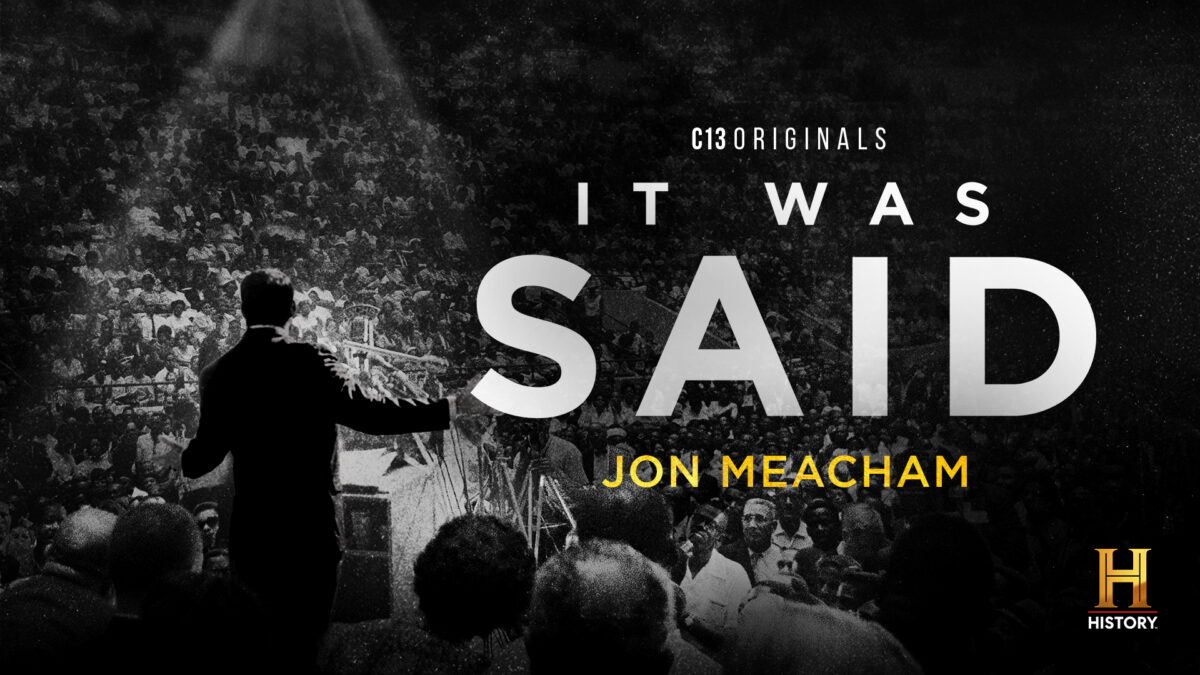 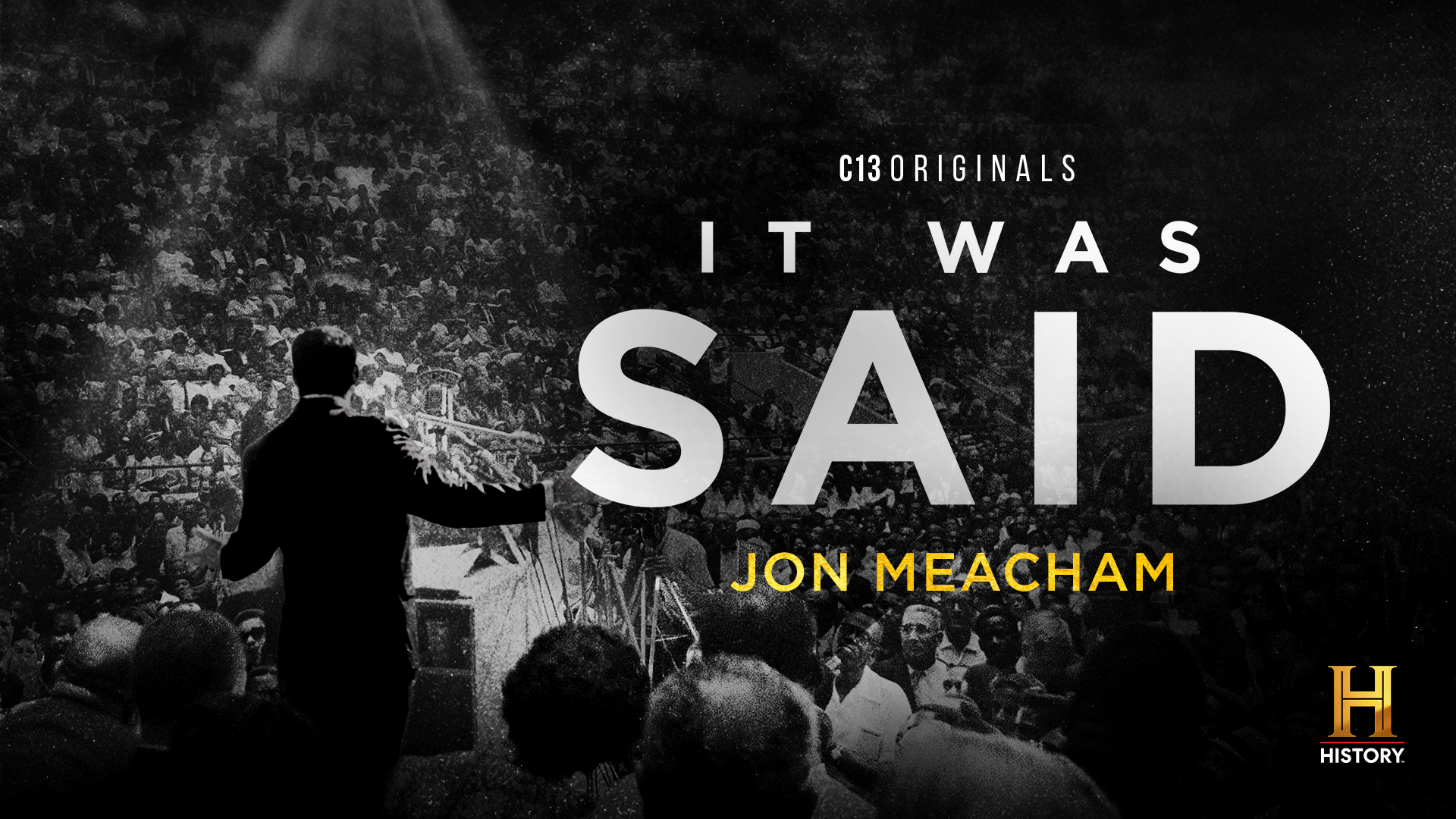 New York, NY (September 22, 2022)—C13Originals, the Peabody Award-nominated documentary division of premium podcast studio Cadence13, an Audacy company, today announced the second season of It Was Said, the critically acclaimed, award-winning podcast franchise that looks back on some of the most powerful, impactful, and timeless speeches in history.

It Was Said is a creation and production of Peabody-nominated C13Originals, a Cadence13 Studio, in partnership with and written and narrated by Pulitzer Prize-winning historian and #1 New York Times bestselling author, Jon Meacham, in association with The HISTORY® Channel.

It Was Season, Season 2 will feature an all-new lineup of generation-defining speeches from towering figures in history, including:

• Theodore Roosevelt’s "Man in the Arena”

• Margaret Thatcher’s "The Lady's Not for Turning”

• Nelson Mandela’s "I am Prepared to Die”

• Ronald Reagan on the 40th Anniversary of D-Day

• Frederick Douglass’ "What to the Slave is the 4th of July?"

• Eleanor Roosevelt’s "On the Adoption of the Declaration of Human Rights.”

It Was Said, Season 2 will launch on Wednesday, September 28, 2022, everywhere podcasts are available. New episodes will be released on Wednesdays throughout the season. Listen to the trailer and follow the show here: It Was Said.

Notable voices featured in It Was Said, Season 2 include Princeton scholar Dr. Eddie S. Glaude, host of C13Originals’ History is US, who will re-enact Fredrick Douglass’ "What to the Slave is the 4th of July?" as well as offer insight and analysis on Mandela’s "I am Prepared to Die” speech. Throughout the series, Meacham will be joined by other top historians, authors and journalists relevant to each respective speech and figure, including: Morning Joe host and author Joe Scarborough; historian Evan Thomas; historian Candice Millard; historian Catherine Grace Katz; presidential historian Michael Beschloss; presidential historian Timothy Naftali; historian Heather Cox Richardson; TIME former managing editor Richard Stengel; scholar Allida Black; Yale University historian David Blight, who is also Director of the Gilder Lehrman Center for the Study of Slavery, Resistance, and Abolition; and University of Texas scholar Peniel E. Joseph.

“I’m delighted to bring such wonderful voices—past and present—to our listeners,” Meacham said. “The speeches we’re exploring this season touch on our highest aspirations as a people—and on our darkest chapters. The speeches and the guests shed important light on the perennial issues that shape us still, and I’m excited to be working with the C13Originals team on this special show.”

‘It Was Said’ is some of our finest documentary work at C13Originals because it continues to shine a light on some of the most important and impactful words ever written, and said, in our world's history,” said Chris Corcoran, Chief Content Officer and Founding Partner, Cadence13. “There is no one better to guide us through these speeches, and hear today’s perspective, than through the voice and words of Jon Meacham. We’re so proud of this series, and to do it with Jon and the History Channel again.”

“We’re delighted to again partner with Jon Meacham and C13Originals for the second season of ‘It Was Said’ to resurface, explore and gain insight from some of the most moving speeches from inspirational figures in history,” said Jessie Katz, vice president audio programming and podcasting, A+E Networks. “Especially at a time when so many aspects of our society seem polarized, revisiting these moments have a way of providing hope and reconnecting us all to our shared past.”

The launch of It Was Said, Season 2 follows the success of critically acclaimed podcast collaborations from C13Originals and Jon Meacham and their history-focused joint studio venture Shining City Audio. The Shining City Audio portfolio includes It Was Said: Sports with Doc Rivers; Hope, Through History; Fate of Fact;  Reflections of History, and History is US, written and narrated by Dr. Eddie S. Glaude Jr.

Jon Meacham is a Pulitzer Prize-winning biographer. He is the author of #1 New York Times bestselling books including His Truth Is Marching On: John Lewis and the Power of Hope; The Soul of America: The Battle for Our Better Angels; Thomas Jefferson: The Art of Power; American Lion: Andrew Jackson in the White House; Franklin and Winston; and Destiny and Power: The American Odyssey of George Herbert Walker Bush. His newest book, And There Was Light: Abraham Lincoln and the American Struggle, will be published on October 18, 2022. He is the host of C13Originals’ Hope, Through History, It Was Said, and Reflections of History podcast franchises, a distinguished visiting professor at Vanderbilt University, a contributing writer for The New York Times Book Review, and a fellow of the Society of American Historians. Meacham lives in Nashville with his wife and children.

Download the cover art for It Was Said here.