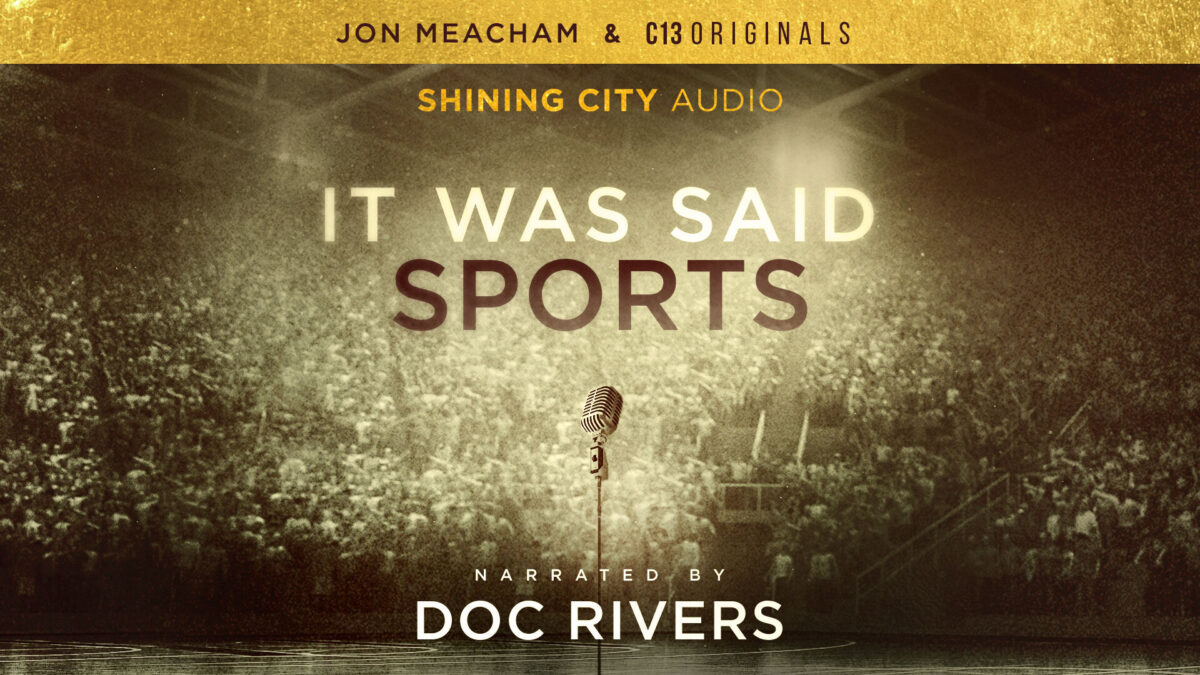 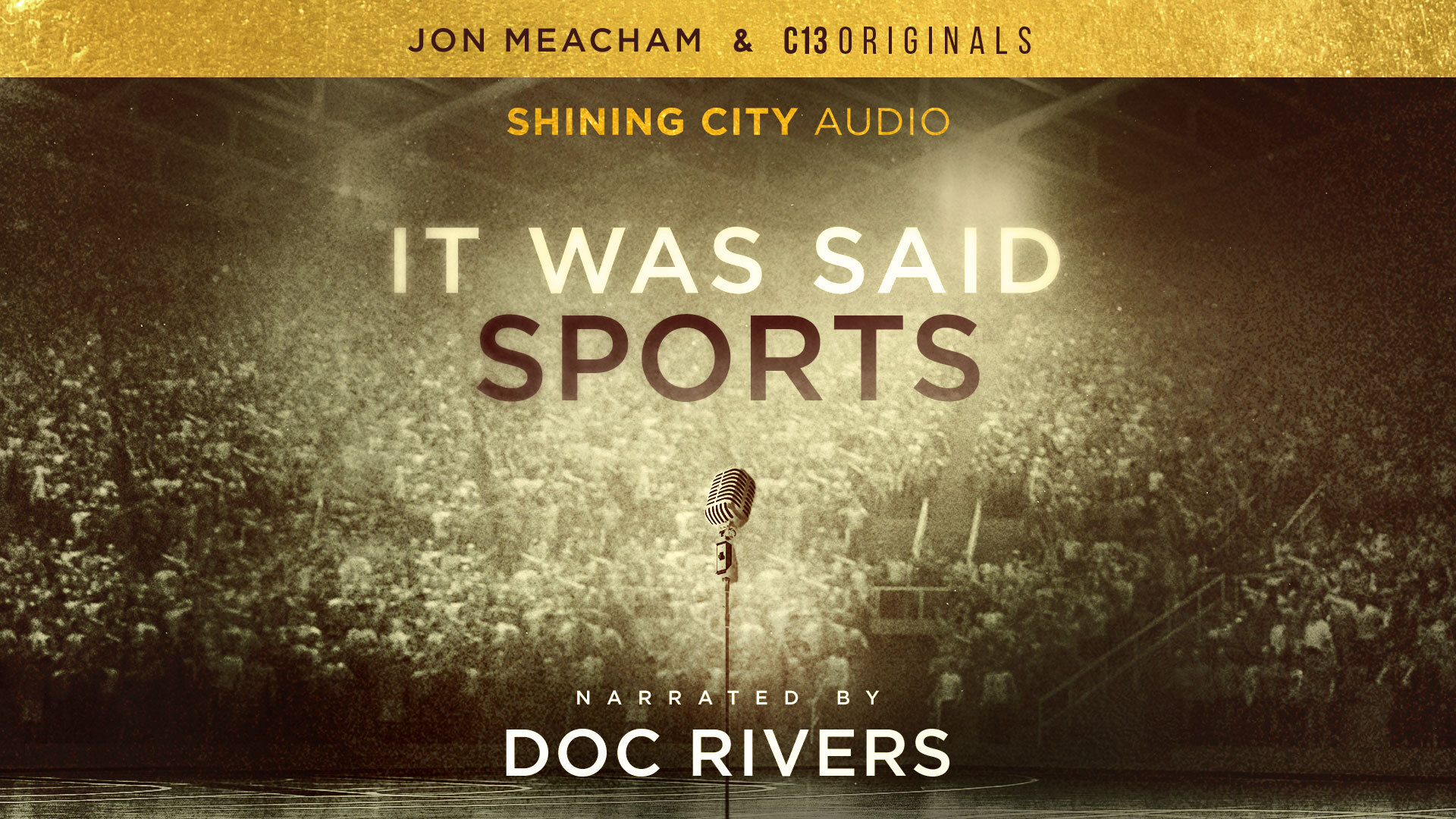 With Doc Rivers Narrating, “It Was Said: Sports” to Highlight Impactful Sports Speeches

This new documentary podcast franchise created, directed, and produced by C13Originals, written by Pulitzer Prize-winning historian and #1 New York Times bestselling author Jon Meacham, and narrated by NBA legend Doc Rivers, is the sports-focused version of the 2021 Webby Award-Winning “Best Podcast Series,” It Was Said, featuring some of the most important and inspirational sports speeches throughout history.

Drawing from powerful figures like Muhammad Ali, Billie Jean King, and Hank Aaron, Season One of It Was Said: Sports will take listeners through six speeches whose impact, legacy, and significance goes far beyond the world of sports. Rivers, Meacham, and a wide range of notable guests--including Michael Strahan, Urban Meyer, and Al Michaels--will offer expert insight, firsthand perspective and analysis into each speech’s origins, the orator, the context of the times they were given, and why they are still relevant today.

Throughout the course of six episodes, It Was Said: Sports will feature:

Season One of It Was Said: Sports will launch on September 8, 2021 everywhere podcasts are available. New episodes will be available Wednesdays. Listen to the trailer and follow the series here: https://link.chtbl.com/IWSSPR.

Meacham and Rivers will be joined by notable guests including:

“Sports are a vital element of our lives, and of the life of the nation. The pursuit of excellence in competition is inherently dramatic and touches the deepest parts of our common story,” said Jon Meacham, Co-Executive Producer, Shining City Audio. “I’m honored to be working with the great Doc Rivers and the C13Originals team to bring these illuminating moments to life

“As a man who's been in the arena, I’ve experienced firsthand the power and impact of the words of great sports figures of our time,” said Doc Rivers. “I’m excited to join forces with Jon Meacham and C13Originals to shine a light on these pivotal moments in history.”

“Throughout history, the powerful words of our great sports icons have transcended sports and inspired, healed, and impacted us as a world,” said Chris Corcoran, Chief Content Officer, Cadence13 and Co-Executive Producer, Shining City Audio. “As we work alongside Jon to build out the Shining City Audio slate and tell these historic stories, we’re proud to partner with Doc Rivers on this timeless series that will resonate with listeners of all generations.”

The launch of It Was Said: Sports follows the success of the critically acclaimed podcast documentary franchises Hope, Through History, It Was Said, and Fate of Fact, co-created by C13Originals and Jon Meacham.

Jon Meacham is a Pulitzer Prize-winning biographer. His latest work, His Truth Is Marching On: John Lewis and the Power of Hope, was published on August 25, 2020 with Penguin Random House. He is the author of #1 New York Times bestselling books including The Hope of Glory: Reflections on the Last Words of Jesus from the Cross; The Soul of America: The Battle for Our Better Angels; Thomas Jefferson: The Art of Power; American Lion: Andrew Jackson in the White House; Franklin and Winston; Destiny and Power: The American Odyssey of George Herbert Walker Bush; and Songs of America: Patriotism, Protest, and the Music That Made a Nation. He is the host of Cadence13’s Hope, Through History documentary podcast franchise, a distinguished visiting professor at Vanderbilt University, a contributing writer for The New York Times Book Review, and a fellow of the Society of American Historians. Meacham lives in Nashville with his wife and children.

Doc Rivers, former NBA All-Star, is the head coach of the Philadelphia 76ers. He played for the Atlanta Hawks, Los Angeles Clippers, New York Knicks, and San Antonio Spurs, and was previously the head coach of the Orlando Magic, winning NBA Coach of the Year in his first season with them, as well as the Boston Celtics and the Clippers. Rivers led the Celtics to the NBA Championship title in 2008.

Download the cover art for It Was Said: Sports here: https://we.tl/t-bhWJ0Z5sWI.